Start The New Year Right: Preparing For The Tax Changes Ahead 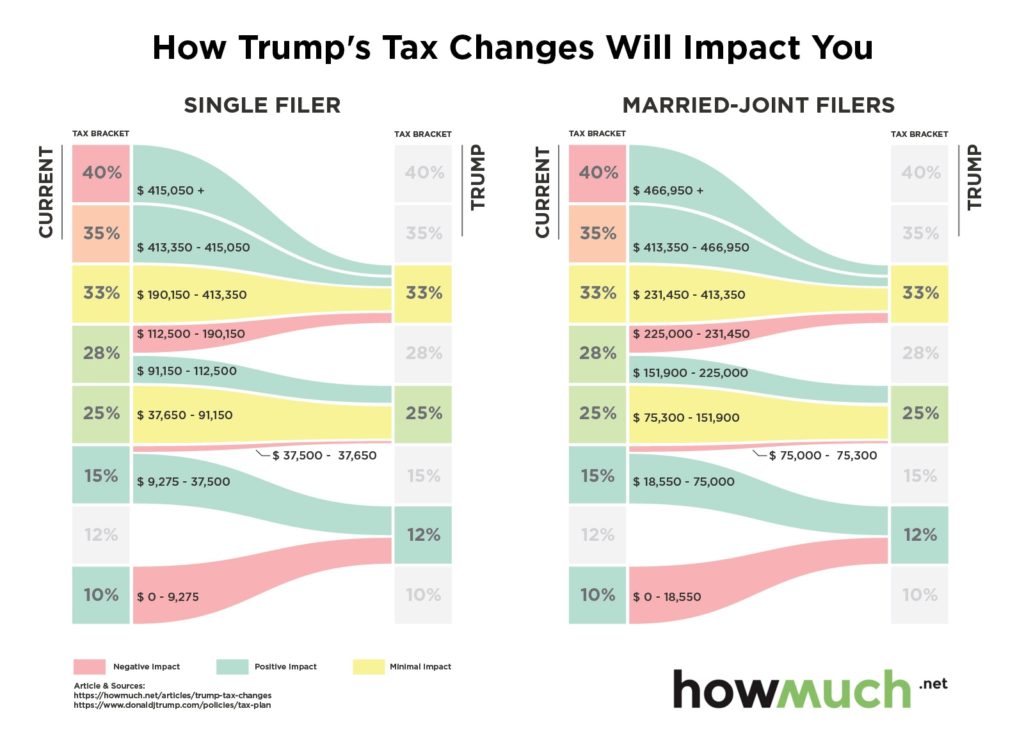 Impact of the proposed Trump tax changes, by How Much, a cost information website.

With the new Trump administration coming on board, we’re likely to see big changes in income taxes before the year is out. Here’s a quick cheat sheet of what you might expect:

Details still uncertain. We don’t know yet which – if any – of Trump’s tax reform proposals will be adopted. Republicans in Congress have their own tax blueprint, so the White House and Congress will need to hash out their differences. But here’s what we do know: tax reform will be a top priority for both.

Corporate taxes likely headed down. Corporate taxes paid by U.S. companies are likely to drop. U.S. corporations currently pay tax at a 35% rate, which is one of the highest rates in the developed world (of course, some pay a lower effective rate by using deductions. See the New York Times’ interesting analysis of average tax rates here).

Trump would cut the corporate rate to 15%, while eliminating many business deductions. This measure has broad bipartisan support and has long been championed by many economists, as a lower tax burden would make U.S. companies more profitable and globally competitive.

Making it simpler. Trump proposes simplifying the tax system, cutting the now seven tax brackets (10% to 39.6%) down to only three brackets (12%, 25%, and 33%). Probably everyone is in favor of that type of simplification. He also calls for raising the standard deduction, and lowering the ceiling on itemized deductions. That’s undoubtedly where special interests will get involved, as rumors of limitations on charitable and other deductions may rile feathers in Washington. Also of concern, Trump’s proposals will lower government revenues and increase the federal deficit.

For most people, taxes are likely to drop. Preliminary analysis of President-Elect Trump’s tax plan, as proposed, suggests that higher income taxpayers will capture most of the benefits, with lower income taxpayers paying the same in tax or in some cases even more. The graph above shows the possible impact of the tax changes, as estimated by HowMuch, a cost information website.

The Tax Policy Center estimates that nearly 47% of the tax cuts will go to the richest 1% of Americans.  “To put it into dollar terms, those earning less than $48,400 will experience an annual tax cut of less than $400, while those earning in excess of $700,000 will walk away with an average of an extra $215,000 per year,” writes Tony Nitti, a Forbes contributor. That may not play well in Congress.

What’s next? Until we know more about what policies Congress will adopt, we’re all in “wait and see” mode. As discussed in a previous article, estate taxes are likely to be eliminated or scaled back, which would simplify estate planning for many more Americans. If you have a large transaction on the horizon, like the sale of appreciated real estate, or a business, make sure to discuss with your attorney and tax advisor the optimum timing of a sale. If your timing is flexible, you may be able to take advantage of lower tax rates ahead.