By Mari Adam on July 30, 2013 in College, Financial Planning 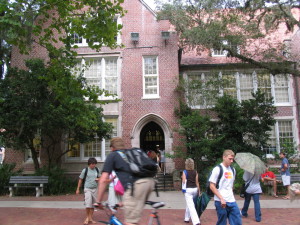 Parents are cutting back on what they are paying for their kids to go to college.

A new study on “How America Pays for College” by financial institution Sallie Mae shows parents are still committed to a college education, but are asking kids and universities to pull more of the weight.

The big picture: a college degree is still a smart investment in the future

Parents definitely get it.  More parents than ever before (85% in 2013, compared to 80% in 2008) understand that a college degree is a smart investment in the future.

… but parents are insisting on lower priced solutions

“In this post-recession environment, families overwhelmingly believe in the dream of college, yet they are more realistic when it comes to how they pay for it,” said Jack Remondi, president and CEO, Sallie Mae.

67% of families eliminated colleges based on cost during the admissions process, a significant increase from 2009.

57% of students attended college but lived at home instead of opting for pricier dorms.

That’s a big jump from the 43% of students living at home only three years ago.

What’s more remarkable is that even higher income students (those with families earning over $100,000) aren’t immune from this trend.  In fact, the percentage of higher-income students staying at home has doubled to 48% over the past few years.

27% of students accelerated coursework to finish college faster and save on tuition.

In the survey, both students and parents claimed they’ve tightened their belts, working hard to cut their spending and earn more at work so extra funds are available for college.

This new austerity has had an impact.  The average amount Americans paid for college has actually declined from its 2009-2010 peak.

… and are giving less support

For the 2012-2013 academic year, parents spent only 66% of what they spent on college three years earlier.

Parents continued to dip into salary and savings to pay college costs, but contributed less, and borrowed less, than in previous years.

Another trend? More families are relying on 529 college savings accounts to pay for college.

… while students rely more on scholarships and grants

Kids are turning over more rocks to find financial aid, and a growing share of the bill is being covered by grants and scholarships.

Payment for higher education is coming from three main sources:

… and here’s why it’s a good thing

Wasn’t it time to put some common sense back into college savings?

Parents have started to push back, saying “enough is enough,” which may help to contain spiraling college costs. And as financial planners, we’ve certainly tried to get the message out that raiding your retirement kitty to pay your kids’ college bills is only shooting yourself in the foot, making you more likely to need handouts from your children in the future (and who wants to end up there?).

Kids now have more skin in the game, which should help them weigh the cost of their college education against the expected payoff, and make more rational choices.

Well, maybe that last point is just wishful thinking, but as a parent footing the bill for two kids in college, I can always dream, can’t I?

← Quote Of The Week: Setting Financial Limits With Adult Kids
Has It Sunk In Yet? U.S. Winning The Powerball Of Energy →