How Professional Athletes Go Broke (But You Shouldn’t)

By Mari Adam on May 21, 2013 in Financial Planning, Investing, Making, Spending, and Saving Money 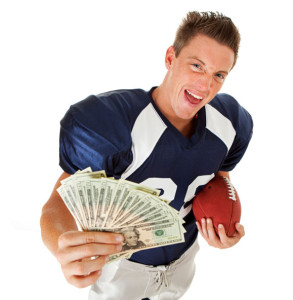 Their talent may earn them millions, but professional athletes learn it’s often easier to make money than it is to keep it.

It’s amazing how much money can be made and lost.  Writes Noah Davis in GQ magazine:

“Antoine Walker earned $110 million and lost it all. Vin Baker managed to burn  through the $93 million teams paid him during an All-Star career. Mark Brunell  made $50 million over the course of his NFL career and is now $25 million in  debt.”

You might think you have little in common with a sports superstar making $5 million per year, but you could be wrong.  Far too many of these top-earning athletes end up broke. The same goofs that trip them up risk sabotaging your financial plan. Here’s how to sidestep these mega-star landmines.

Not knowing how to handle money

Many Americans leave school without ever learning the basics of investments, borrowing, and money management.  The same is true of sports superstars. “Many athletes “go pro” right out of high school or college, without ever having real world experience managing money,” says Cliff Goldstein of Marketwatch. If that is your situation, you need to do one of two things.  Sign up for a crash course in Money 101 or get good advice. Otherwise, you’re likely to get yourself into real trouble by making bad decisions and missing good opportunities.

Professional athletes may make big bucks, but far too many spend even bigger.  Taxes might eat up half of a typical $5 million salary. Agents, trainers, management fees, lifestyle expenses, friends and family, and housing might use up the other half (see GQ’s breakdown of the typical mega-athlete’s budget). Less than 10% of those earnings make it into solid, long-term investments.

Your salary may be less than $5 million per year, but the same principles should apply.  Spend less than you make, and save and invest 10% to 15% of salary each year.

According to Goldstein, many athletes fall victim to financial “advisers” who “take advantage of athletes’ lack of financial knowledge and inability to keep track of their large bank accounts.” To help ensure you are getting good advice, look for a fee-only advisor (one who does not accept investment commissions) so you get impartial and objective advice, instead of someone who just wants to push product.  Look for someone with the Certified Financial Planner (CFP®) designation, the recognized standard of excellence in the profession.

Athletes get into trouble when they stray from “boring” investments like stocks, bonds, ETFs and mutual funds to dabble in riskier schemes like restaurants, real estate, casinos and other business ventures (sometimes involving friends and relatives).

Save the excitement for your personal life, and keep your investments straightforward.  Stick to low-cost, no-commission investments that trade daily.  Avoid non-traded partnerships and investments with sales commissions that trap you for years.

Generous to a fault

It’s good to share the wealth, but professional athletes are known for making lavish gifts to family, friends and “entourage.”

Says Noah Davis of GQ: “Friends and family add to the tab. Antoine Walker reportedly had a crew of 30-70  people on his payroll. Most pros won’t ever spend that much, but $1,000 a month a piece for a couple friends, $1,500 a month for your brother, and a $50,000 for  the mortgage on your mother’s house adds up quickly.”

Your expenditures might have fewer zeroes, but you should still make sure you know where to draw the line.  Don’t give gifts you can’t afford just to keep up appearances.  And beware of supporting grown kids; often you’re not helping, you’re enabling.

Thinking you can work forever

Athletes often overestimate the length of their careers, says Marketwatch’s Goldstein. After all, the average career span of an NBA player is less than 5 years, and even shorter in the NFL.  “Many don’t acknowledge the fact that (their career) can be cut short by an injury or numerous other factors, and thus don’t plan for a retirement safety net properly.”

Don’t make the same mistake.  Health issues or a corporate layoff may end your career too early, so don’t procrastinate. Starting savings early.  We once worked with a couple who spent their thirties and forties raising a family and putting the kids through college. That’s great, but when they were finally ready to start saving in their fifties, the husband was laid off and the real estate crash sank their savings and creditworthiness. It will be hard to squeeze a whole career’s worth of savings into a few remaining years.

Gear up for the long haul

In sports, and everyday life, your money needs to last a long, long time. What’s the secret? Save enough to last many years and then follow a disciplined withdrawal strategy so your funds don’t deplete too early.

According to Sports Illustrated, 78% of NFL players file for bankruptcy within two years of retirement, and 60% of NBA players file within five years. To get there, you can bet they made more than one of the “superstar” mistakes detailed above.

We all love to follow our favorite teams and favorite players (GO HEAT!). But when it comes to managing our money, we’re better off not following in their footsteps.

← 5-Minute Fix: Do You Have Enough Life Insurance?
Helping Millennials Start Off On The Right Foot →