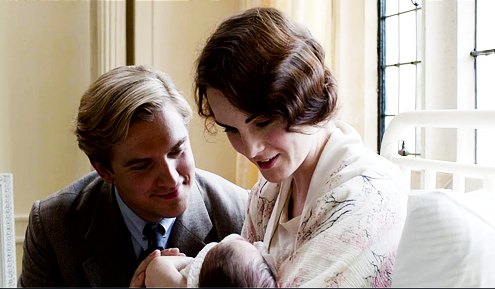 Over ten million Americans tuned in Sunday night to see the long-awaited fourth season of the British hit show Downton Abbey, which follows the life, loves and travails of an upper crust English titled family and their servants in the tumultuous 1920s.

The show has also provided rich fodder for the “what not to do” school of estate planning. See our previous blog featuring key estate planning lessons from the show, which kicks off with the death of the estate’s heirs on the Titanic, setting in motion a tableau of unintended consequences caused by the failure of succession planning.

The newly debuted season four finds young Lady Mary Crawley plunged in grief following the death of her husband Matthew in a careless car accident. She’s devastated, and left to raise her newborn son on her own.

Even worse, the normally “meticulous” Matthew, an attorney by trade, left no Will, meaning virtually nothing has been left to Lady Mary.

Matthew’s share of the estate passes to his newborn son, who is too young to inherit, leading to a growing conflict between the estate’s professional managers, with their new-fangled management ideas; the Earl of Grantham, Lady Mary’s father, whose views on good breeding and noblesse oblige reject the middle-class concept of actually trying to turn a profit; and Lady Mary, who risks losing any say in how the estate is to be managed, increasingly seen as the “little woman who shouldn’t be troubled by anything so harsh as reality.”

How did this messy state of affairs come to pass?  “He should have made a Will,” say his survivors, disconcerted by the unexpected oversight.

Matthew died “50 years before his time,” exclaims his bereaved widow. “Poor Matthew,” commiserate his mother and sister-in-law. “He thought that death was many years away.”

In real life, it is indeed a tragedy to see a family torn apart by a premature death. While we can’t control the timing of our loved one’s passing, we can help to ease the path for the survivors by proper estate planning (such as making a Will, naming a guardian for minor children, and planning for business succession), buying adequate life insurance, and making sure dependents and family will be financially provided for.

Unfortunately, Matthew Crawley’s failure to plan is still typical of his generation. “Almost three-quarters (71%) of adults under the age of 34 do not have a will,” says a survey by the online legal service Rocket Lawyer.  Even among Baby Boomers and older adults, nearly half do not have a Will.

Financial Planning Tip: Do you have a Will? If not, make it your New Year’s resolution to get one. It’s quick and painless, and needn’t cost you much.  Need attorney referrals?  Clients are welcome to call us to be pointed in the right direction.

← 12 Things You May Not Know About Janet Yellen
Quote Of The Week: Women Searching For Financial Knowledge →