What I Learned During A Week In Greece

By Mari Adam on November 11, 2015 in Financial Planning, People & Profiles, Women and Money 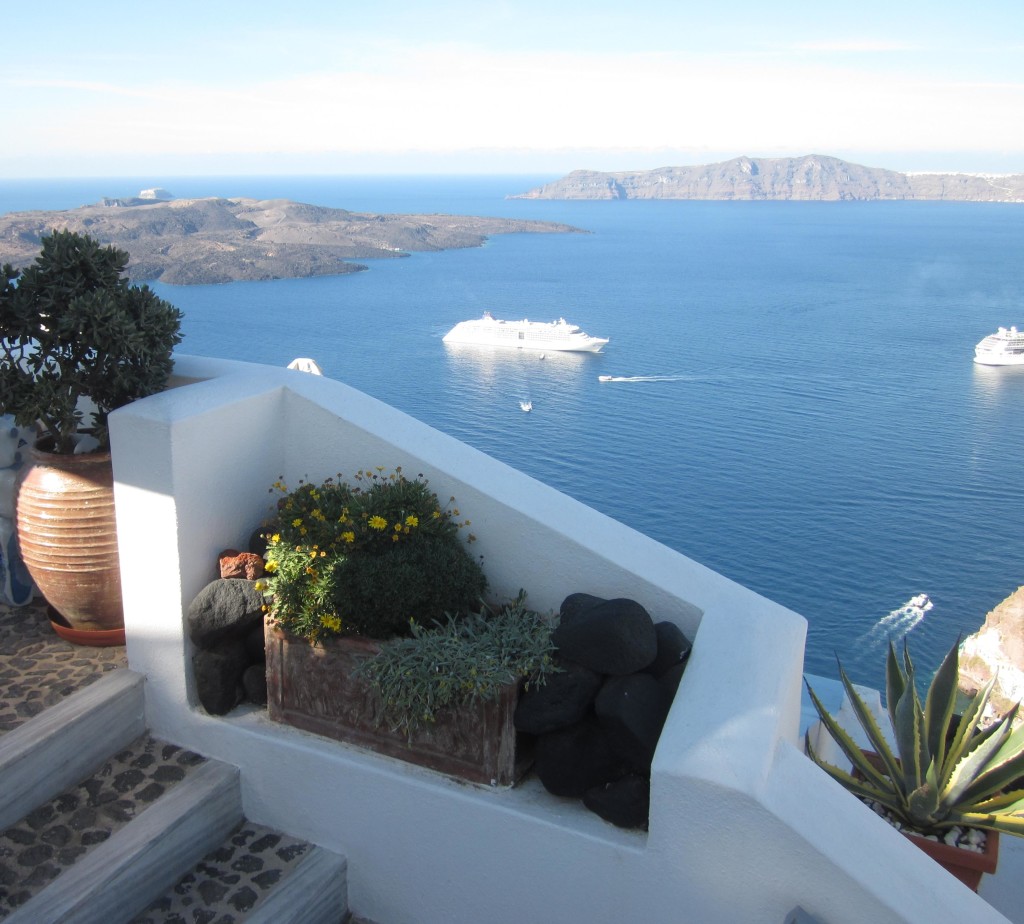 Crisis? What crisis? View from the cliffs of Santorini.

When I tell people I just came back from a week in Greece, most people exclaim something along the lines of “Greece! That’s my favorite place!”

But just as many people seem fearful of travelling there due to concerns about political protests and the refugee crisis.

After listening to American media coverage, it’s often hard to know what to expect when you go overseas, and whether the “bad news” on the evening broadcast is real or exaggerated.

So here’s some observations on my recent time in Greece, and what the news reports may be overlooking:

You might never guess there’s a crisis. I hadn’t been in Athens since my college days, and didn’t want to spend a lot of time there during this visit. So after an overnight stay in the capital (spent wistfully waiting for my lost bag to show up on Air Canada), I took off the next day for a week in Crete, Santorini and Mykonos.

Athens was actually fun and I had a great time getting lost, and then found, trying to decipher a flimsy street map written partially in Greek. There was a fantastic view of the Acropolis from my hotel balcony. What struck me the most was the dense traffic and general noisiness of streets in the Plaka area where I was staying. The city was packed with tourists, jack hammers, construction projects, and bustling, brand-name boutiques. The locals and shopkeepers were universally kind and helpful. The one exception was the cab driver who tried to overcharge me coming in from the airport, despite a huge sign announcing the fixed-rate fare. “That never happened before the crisis,” said one local.

No shortage of cash in the ATMs.  I had some leftover Euros that were enough for the airport cab ride, but as soon as I arrived in Athens, I looked for an ATM. There were a couple a short walk away in Syntagma Square and I had no problem withdrawing Euros using my ATM card. Remember earlier this summer when locals were limited in how much cash they could withdraw? That seems to be over, and there’s no limit on withdrawals by foreigners that I could discern (meaning I must not have spent enough trying to find out!). By the way, don’t forget to alert your bank and credit card company before an overseas trip, so their fraud departments know you’ll be using your cards in unfamiliar places and don’t cut you off by mistake.

But it’s sure hard to get change. No shortage of cash, but there sure seemed to be a serious shortage of change wherever we went.  Most establishments – hotels, restaurants and stores alike – claimed to have little or no change on hand (How is that possible? And where does it all go?). We started developing fairly elaborate strategies to break 20 or 50 Euro bills (about $20 or $50 in U.S. dollars) usually involving buying little nut bars or drinks at the Greek mini-marts, which we learned, always had change.

Expecting lower prices? Not sure about that. Prices should have dropped due to the crisis, right? Good luck with that. First of all, tourism in the Greek isles is still going gangbusters. It’s an astonishingly beautiful place and travelers come from all over to enjoy the gorgeous scenery, fabulous food, and legendary hospitality. We also talked to several young Greeks who come from their homes in the North to spend the summer season working in the islands, where jobs are more plentiful. In October they return home.

Secondly, while the strong dollar, which has appreciated against the Euro, should make things less expensive for American tourists, recent policy changes have negated much of the cost savings.  The Greek government just raised the VAT tax (the Value Added, or sales tax)  from 13% to 23% on a wide range of goods and services to fund the government shortfall, meaning many of the things you buy as tourists are now more expensive.

That said, my island-hopping travel companions and I were able to enjoy extraordinary food and delicious wine (much of it produced locally in Crete or Santorini), at a very reasonable price. If you’ve been dismayed by prices in London or Paris recently, you would be pleased to see how much further your travel dollars go in the Greek Islands.

The belt tightening you may not see. Beneath the surface, there were signs that everyday Greeks have been tightening their belts due to the crisis. Some museums have hit-or-miss schedules due to personnel cutbacks. Restaurants that were there last year have shuttered their doors. One American expat living in Crete, now divorced from her Greek husband, told us she had to negotiate a reduction in her rent to make ends meet. Like mothers everywhere, she’s making sacrifices to ensure a better life for her sons. Several hundred dollars per month go to pay for private after-school tutoring for her boys. Without that private boost, she feels they won’t ace the grueling school exams that “qualify” them for public higher education. The Greeks we talked to all acknowledge hard times, but try to keep their spirits up. 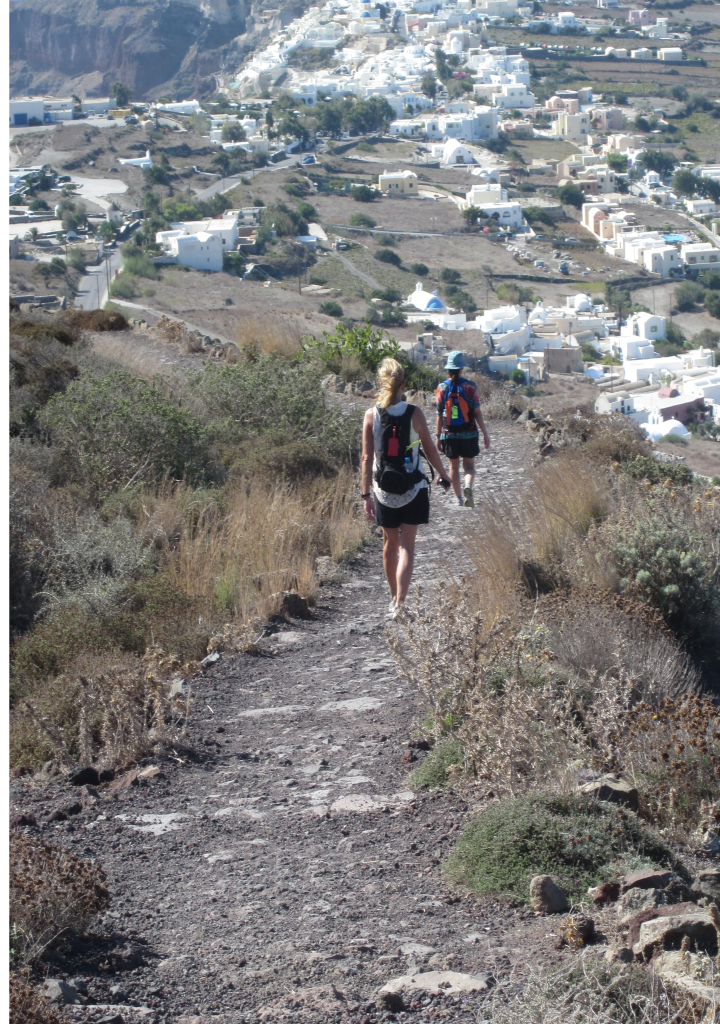 Our hike from Thira to Oia on the island of Santorini.

The refugee crisis. We did not see any visible evidence of the refugee crisis in Crete or on the other islands where we stayed (although one ferry we were scheduled to take between islands was removed from service to transport refugees off the Turkish coast).

We did hear from other travelers, however, that the island of Lesvos, a Greek island only 6 miles off the coast of Turkey, is being devastated by the huge influx of refugees fleeing Syria via Turkey. While the people of Lesvos are doing their best to house and care for the refugees, the uncontrolled inflow is driving away the tourists that support the island economically. For more background on the crisis in Lesvos, see the powerful article called “An Island of Refugees” by Nicolas Niarchos that appeared in the September 16, 2015 New Yorker. Niarchos just published a follow up article, “A Tragedy Unfolds on Lesvos,” on October 23.

Hospitality and Family. Our clients of Greek heritage, as well as those who have spent any time in Greece, know of the legendary hospitality of the Greek people. You are meant to feel welcome everywhere. In Crete, after a meal, you’re offered complimentary “spoon desserts” with homemade yogurt and delicious fruits. That’s followed by small bottles of raki, the local liqueur flavored with honey, pomegranate or other flavors (the worst thing about leaving Crete for Santorini? No more “raki”!). No rush, take your time. Values are very different. Food is fresh, olive oil’s the universal cure-all, life is meant to be enjoyed and family is everything.

It’s a good reminder of why it’s important to travel. It’s wonderful to discover new places, experience different ways of living, and see life from someone else’s point of view. But most of all, the real value of travel is going out  … and coming back a somewhat changed person.

← Quote Of The Week: Is Your Smartphone Making Your Investments Dumber?
Adam Financial Associates Re-Certified By Women’s Business Group →

One Response to What I Learned During A Week In Greece