Elections Got You On Edge? Here’s What Happens To Your Portfolio In Election Years 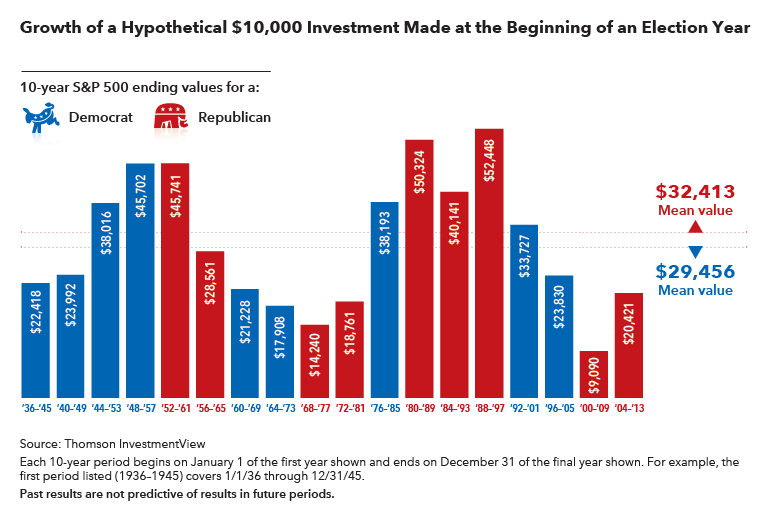 We don’t blame you for being a bit nervous. In fact, you’re not alone.

More than a few of our clients are on edge with the presidential elections.

As we get closer to voting day, we’ll be bringing you special insights on what the elections might mean for your portfolio, and how to protect your bottom line whether the tide turns red or blue.

Regardless of who is elected, long-term investors still make money. In all but one out of 18 ten-year periods, investors turned a profit in the decade following the election (see graphic above, courtesy of American Funds). The one exception was the decade following George Bush’s election in 2000, which witnessed 9/11, the dot-com bust, and the financial meltdown.

Whether Republicans or Democrats win, there isn’t a huge difference in market returns. Republicans do have an edge. The average decade following a Republican victory saw markets grow from $10,000 to $32,413. Markets grew from $10,000 to $29,456 after the average Democratic win. According to researchers at American Funds, investment success depends more on the strength of the U.S. economy than the party affiliation of the victor.

Even “bad times” can produce good returns. Imagine the despair you might have felt voting in 1936 when the U.S. was in the grips of the Great Depression. Democrat Franklin D. Roosevelt won the election. Hard to believe given the grim economic context, but the $10,000 you might have invested at the beginning of 1936 would have grown to $22,418 by 1946, an 8.41% compound annual growth rate.

The Takeaway: It’s easy to get caught up in the election anxiety. But remind yourself that we’ve been down this road before. What really drives performance in the markets is not the presidential election, but rather the overall macro economy, say market strategists. You’re investing for the long-term to meet your own individual goals. We’re there to help you stay on course, tune out the noise, and focus on economic and market fundamentals.

← Watch Out! Bank Hackers Now Going After Your Mobile Phone
Time To Plug The Holes In Your Retirement Bucket →