Overspending? Blame It On Social Media.

By Mari Adam on May 15, 2019 in Making, Spending, and Saving Money, On Your Own: Money Smarts For Millennials

That selfie could be costing you more than you think. 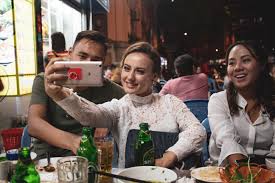 Social media is having a powerful, and negative, influence on how Americans spend.

More than a third of Americans admit “their spending habits have been influenced by images and experiences shared by their friends on social media,” according to the 2019 Modern Wealth Survey, a research project sponsored by Schwab that interviewed 1,000 Americans on how they spend, save and invest money.

60% of Americans surveyed say they don’t understand “how friends can afford the expensive vacations and trendy restaurant meals they portray on social media.”

When interviewed, they admitted that social media has a very powerful – and negative – influence on how they manage their money.

Many Americans confess that FOMO – fear of missing out – is leading them to spend more money than they know they should.

The problem is particularly acute for younger spenders (Gen Z and millennials), who say they are being pressured to spend as a result of social media envy and the desire to not be left out of friends’ experiences.

“The burden to ‘keep up with the Joneses’ has been part of our culture for decades,” says Terri Kallsen, executive vice president and head of Schwab Investor Services, sponsor of the survey. Unfortunately, social media and peer pressure is leading many consumers to made bad decisions about how, and how much, to spend.

The Takeaway: The first step is to know what you make, what you need to save to meet your goals, and what’s left to spend.

If you’re under too much pressure to spend, consider stepping away from social media, restructure your social time with friends and family to include activities you can afford (and avoid the budget busters), and post visible reminders of your savings goals (that Caribbean vacation, for example) on your fridge to keep you focused and motivated.

One important piece of advice from the Schwab survey? Get a financial roadmap. “More than 60 percent of Americans who have a written financial plan feel financially stable, while only a third of those without a plan feel that same level of comfort,” reports Schwab. Another plus? Those with a plan have healthier money and savings habits.

← Today’s Savings Tidbit: On The Job After Age 70? You Can Still Do Wonders!
2019 Barron’s Independent Women Advisors Summit →